Announcing the IWCS Teacher of the Year

Friday was one of those days I really enjoy as Superintendent.  Friday was the day I surprised our 2018-2019 Teacher of the Year for the entire division.  The honoree was Mrs. Julie Eng, a teacher at Smithfield High School.  Julie teaches English, Creative Writing, and Teachers for Tomorrow at SHS.  She is a very humble person and prefers to let her students have the spotlight.  After presenting her with flowers, and taking several pictures, she was ready to resume the normalcy of her classroom.  It's evident her students respect her, appreciate her, and love having her as a teacher. Although being selected Teacher of the Year is an incredible honor, it can't top having the approval of the students you teach. She has made a lasting impression on hundreds of lives and that, by far, is the greater legacy. 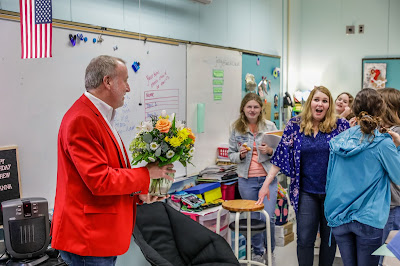 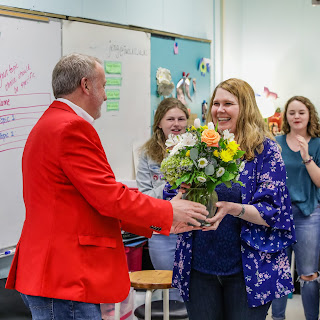 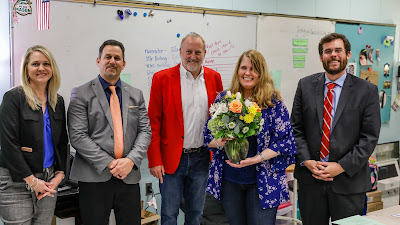 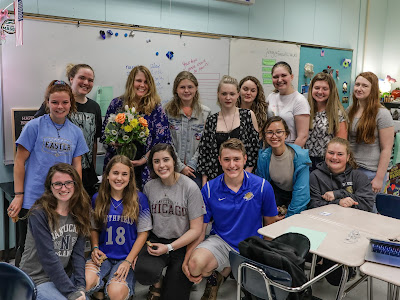 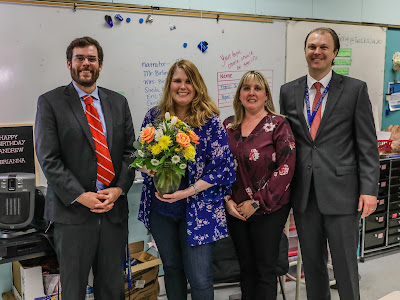 B is for Budget

In March 2019, the Isle of Wight County School Board approved the proposed budget for 2019-2020.  The budget requested an additional $1,981,047 in local funding when compared to the current year.

The Isle of Wight County Administrator has proposed funding IWCS $948,106.  When combined with the state funding, the total would cover:


Some of the items not included in proposed funding:


Additional information can be found on the IWCS Budget Page at https://www.iwcs.k12.va.us/apps/pages/budgetplanning

The Board of Supervisors will make the final decision on the amount of funding appropriated for the school division.  They don’t “fund” a specific project or position, but they provide the overall funding for IWCS, and the division then decides how to use the funding to support those needs.  They have not eliminated the STEM teachers, for example, but supporting the County Administrator’s proposal would mean IWCS would not receive the funding it needs to add those positions. It will be helpful to keep that in mind when speaking to the BOS about additional funding.

There are two opportunities to speak on the proposed IWCS budget:
The IWCS Capital Improvement Plan approved by the School Board includes funding for renovating and expanding Hardy Elementary, replacing the Bus Garage, building a new elementary school in the northern end of the county  (when triggered by enrollment increases), and an renovating Westside Elementary.  Information on the IWCS Capital Improvement Plan can be found on the IWCS website at https://www.iwcs.k12.va.us/apps/pages/planning

We hope to see, and hear from you, at these upcoming meetings.  You need to make your voice heard about the budget.  If you can't be there in person, have someone who will be there deliver a letter from you directly to all the supervisors.  They need to fully understand the number of parents, community members, and employees who support the division's budget as presented.  You need to let them know if there are things that should be funded that were not included in the county administrator's budget.  Your voice does matter.

Thank you for your support of Isle of Wight County Schools
Posted by Dr. Jim Thornton at 1:24 PM

Email ThisBlogThis!Share to TwitterShare to FacebookShare to Pinterest
Labels: board of supervisors, budget, Isle of Wight County Schools

Tuesday evening I spoke to members of the Hardy PTA and other citizens who came out to Hardy for a special meeting on the future of the school.  I shared with them our plan for Hardy, which includes a significant renovation and addition to the aging facility.  I showed them examples of recent renovations throughout IWCS so they could see that our proposal is not just putting "lipstick on a pig".

Many of the parents, grandparents, and citizens who spoke Tuesday night shared their love for Hardy and their appreciation for the incredible staff who teach and care for their children daily.  They agreed that the children in the Hardy district deserve similar spaces and programs offered at other elementary schools.  We showed a video that highlights the incredible differences between Hardy Elementary and a newer elementary school less than 15 miles away--Carrollton. Whether you have ever set foot in Hardy or Carrollton, you must watch this video to see for yourself the side by side comparison of these 2 schools.  You will immediately recognize the issues at Hardy and understand why we need to implement the proposed plan as soon as possible.

There were some questions from parents about how this project would impact taxpayers.  If you are a homeowner, then the renovation, if approved by the Board of Supervisors, will probably result in a tax increase.  Our calculations are that it may be around 2.3 cents per $100, but the rate would be determined by the Supervisors.

I want to thank everyone who came out to the meeting on Tuesday, including Mr. Rudolph Jefferson, Board of Supervisors, Hardy District, and School Board Members Vicky Hulick (Chair, Newport District), Jackie Carr (Vice-Chair, Carrsville District), and Kirstin Cook (Smithfield District).  I appreciate Mrs. Denson's assistance with getting the word our to her parents about the meeting.  Most importantly, I want to thank everyone who attended the meeting and those who candidly shared their feelings about Hardy.

The Board of Supervisors has scheduled a Public Hearing on the Operating Budget and Capital Improvement Plan budget for April 25, at 6:00 pm, at the IOW Courthouse Complex.  We need our parents to share their support for the Hardy project with the Supervisors.  If you can't attend, consider writing a letter that someone who is speaking can deliver to the Supervisors that evening.  Let's make sure the students and staff at Hardy have a facility that matches their same level of greatness. 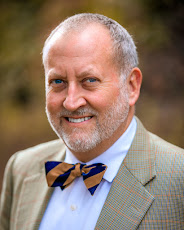